Floreo in the Yuma Sun

Floreo's Art Director, Meredith Gammon, is a Yuma resident and her work caught the attention of reporters. 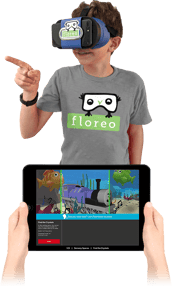 This screenshot shows an image from the floreotech.com homepage. “I was starting to look at ideas that could be applied to the autism space, just because my life was so personally affected by all of the hard work my son has put into developing his abilities,” said Vijay Ravindran, CEO of Floreo. “Virtual reality felt really different and powerful to help the (ASD) community. What the team that I’ve built has learned is that kids are really engaged in the animated environments we’re able to build in virtual reality.”

Virtual reality can perform many functions, but with Floreo, a Washington, D.C.-based tech company, individuals with autism spectrum disorder (or ASD) have the ability to practice and develop essential behavioral, social and communication skills in real world scenarios from the comfort and safety of their own home or another familiar environment.

According to the company’s CEO Vijay Ravindran, this method of leveling technology with therapy and teaching life skills was largely inspired by his son, who is on the autism spectrum and has had positive experiences with virtual reality technology.

“That ended up seeding this idea that virtual reality could be a new medium for therapy for kids who have developmental delays like autism,” Ravindran said.

Using his tech background, which he’s developed and expanded while working with entities like Amazon and the Washington Post, Ravindran created Floreo which, in Latin, translates to “blossom.”

“I was starting to look at ideas that could be applied to the autism space, just because my life was so personally affected by all of the hard work my son has put into developing his abilities,” he said. “Virtual reality felt really different and powerful to help the (ASD) community. What the team that I’ve built has learned is that kids are really engaged in the animated environments we’re able to build in virtual reality. They’re able to learn skills that they’re able to translate to the real world, and it creates really valuable tools that therapists and special educators can use to convey those skills.

”With distance learning now a factor in education owing to the COVID-19 pandemic, Ravindran said Floreo’s virtual-based system can be used to support students who are learning at home or as a teletherapy application, as it creates alternative opportunities for families who may have reservations about visiting a clinic in person.

What’s unique about virtual reality is the medium can transport individuals into new environments; for those on the autism spectrum, this type of immersion teaches valuable skills for navigating a given situation while affording the opportunity to practice those skills until they’re comfortable and ready to apply them to the real world.

“When you think of traditional therapy, it might involve workbooks or playing with toys or talk therapy,” Ravindran said. “However, when you’re trying to help a child practice and develop skills that are more life-oriented, the use of virtual reality gives the therapist the ability to transport the child into settings that can create more of a ‘practice environment’ for those skills.

”For example, a child with autism may struggle with the steps of crossing the street – looking left, right and left again – or understanding the dangers of jaywalking or potential factors like a motorist running a red light even though the “Walk” sign is illuminated.

“That’s very difficult to teach in a therapist’s office or a special education classroom,” said Ravindran. “In virtual reality, you can actually create an environment where the child is on the street corner and can see all these things happening, can see cars going by, and it doesn’t have the dire consequences if you end up messing up that it would if you tried that in the real world.

”Police encounters are another example, and a critical one to gain skills for. In September, a 13-year-old boy with Asperger’s syndrome (an autism spectrum disorder) was experiencing a mental health episode when he was shot multiple times by Salt Lake City police responding to his mother’s call for assistance. According to Salt Lake City-based KUTV, Linden Cameron’s mother Golda Barton warned police that her son was afraid of police officers and would likely run away when they approached him; he did, and officers reportedly fired 11 times, leaving Cameron with serious and permanent injuries.

According to Ravindran, this is a heightened fear for parents and loved ones of children, teens and adults in the special needs community. With Floreo, they can quell those fears with immersive lessons that were created in partnership with police departments in Philadelphia, Pennsylvania, and Montgomery County, Maryland.

“From the police’s perspective, they’re not necessarily equipped to on-the-spot diagnose why someone is acting a particular way, why someone may not be responding to their questions in a way they would expect, and it often leads to dangerous encounters,” Ravindran said. “One of the behaviors that can often happen is kids with autism will walk away and not respond. Our company interacts with lots of families, and this is one of the areas that there is a lot of concern and fear around. We’ve developed a novel set of lessons to help children learn how to navigate an encounter with law enforcement and answer the types of questions police officers commonly would ask.”

Available for use as a standalone module or as part of a more cohesive lesson plan, police encounters and successfully crossing the street are just two lessons among more than 175 in the Floreo library – each of which have been designed by the company’s art director Meredith Gammon, who resides right here in Yuma.

Gammon has been with the company since its inception in 2016, gamifying real-life lessons in communication, school-based interactions and other social experiences.

“I make all the characters, the art, the animation; everything that you see in our app, I have made,” she said.

Gammon moved to Yuma last summer by way of Philadelphia; in chatting with local parents and caregivers for children with ASD, she soon discovered that the COVID-19 pandemic’s impact on local education caused some difficulties and delays in their learning as many students across the county missed out on valuable hands-on lesson time – especially those with disabilities who thrive best with learning of that nature.

“I wanted to bring awareness to the Yuma community that there are resources available, and we’re here to help,” said Gammon. “We are making the best, most evidence-backed content we can in order to help families through these troubled times.”

Gammon noted that while she’s developing new content to release every month, she’s also working closely with therapists to fully understand the behaviors she’s targeting in each illustration.

“Being able to learn about what some of the struggles and challenges are for these kids, I feel like a much more rounded game developer now,” she said.

Today, Floreo’s users range from clinics providing therapy services to public school districts and private institutions, to social work-related organizations, to families and caregivers assuming that “coaching role” in lieu of a clinician.

According to Ravindran, Floreo has particularly high value for rural communities lacking the density of patients needed to establish an array of brick-and-mortar therapy centers. Because Floreo can be used as a telehealth or distance learning system, the technology can “open up the possibility” for a specialist in Phoenix to deliver therapy services in Yuma without the required travel. And, Ravindran said, the services are “more than just talk therapy.”

“When you’re working with kids and you’re working with a person with autism, simply having a video conference screen is often insufficient to teach the type of skills that you want to teach,” he said. “The Floreo system enables the family have the headset at home, the child can go into virtual reality at home and a clinician can, over the internet, supervise therapy lessons.”

Upon signing on, Floreo pairs families with a clinician to provide the appropriate training to utilize Floreo in-home if this is the method they choose. According to Gammon, Floreo offers a free trial for the first month followed by a monthly fee or annual subscription; the technology currently operates with Medicaid coverage in the state of Maryland and is seeking expansion into other states.

To download and utilize the Floreo app, families need an iPhone 7 or later version and a headset designed to hold it – which Floreo provides for $15 – as well as an iPad. The app sets the phone to “virtual reality mode” while a separate coaching application runs on the iPad, which is controlled by the facilitating parent, educator or therapist.

As a local, Gammon said she’s also available to provide demonstrations and facilitate the onboarding process for new teachers implementing the technology in their classroom in lieu of a virtual training session.

Later this year, Floreo plans to launch a new suite of lessons targeted toward children with ADHD. According to Ravindran, these lessons are in the co-developing stage with the National Institutes of Health.

“For many people, virtual reality is this really exotic technology that most people have never tried; but virtual reality is actually within arms length of everyone’s reach today,” said Ravindran. “The name Floreo means ‘blossom’ in Latin, and our mission is to help every child reach their fullest potential. There are a number of kids today who have developmental challenges like autism who, with the right types of therapy and training delivered to them, can reach new heights. For every family that’s unique, but they all usually revolve around the same things, which we want for all of our kids: that they are able to succeed academically and go to college, that they are able to be eventually employed, that they will build great relationships and have a wholesome life. These therapy services are stepping stones for children to reach that eventual success in adulthood.” 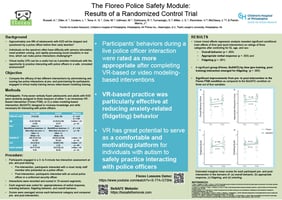